Video from my set at MIRA Festival, Barcelona

A few video clips of my recent show at the MIRA festival in Barcelona have surfaced, giving you a taste of my set alongside Oliver Jennings' visuals.

It's difficult to believe that almost a year has passed since the first 'Touched' album, but the next instalment of this charity compilation is due to arrive on the 28th November. Like the first, all proceeds will go to the Macmillan Cancer Support charity, which aims to provide cancer sufferers with care, support and assistance during and following treatment. Also like the first, a staggering number of artists are involved, though this time the number of participants is more than doubled: there are currently over 250 tracks confirmed for the release, including contributions from personal faves such as Autechre, Brothomstates, Datassette, Plaid, Mr. Projectile and Hecq, to name but a few. I'll have a new track in there too. It's sure to be an immense collection -- there's a full list of the artists involved on the Touched Facebook page.

The mysterious folk behind LA's Tipping Hand Recordings recently celebrated their first birthday by assembling this excellent free compilation. Memory Waves brings together a selection of previously released tracks, including contributions from Kettel, Yimino, Borealis, Jacob 2-2, and many others, all remastered for the occasion.

From the press release:

Memory Waves features a selection of some of the world's most diverse electronic producers from Germany, England, Canada, Netherlands, North America and the UK. Memory Waves sheds new light on songs previously released by remastering and reassembling each track into a fluid, storylike album.

In celebration of hitting 5k followers on Funckarma's SoundCloud page, Roel Funcken has just uploaded the instrumental version of our Lamb remix. It's free to grab... so feel free to grab it!

Ochre Mix for Words On Tracks

I recently put this mix together for Words On Tracks, featuring some of my musical influences, acknowledging key moments of my formative years, as well as some general favourites. Additionally, I wrote a commentary for each track, which you can read either on Words On Tracks' Facebook page, or here below the fold. Thanks to Fred for kindly inviting me. Be sure to give Words On Tracks a 'like' if you're on Facebook. Hope you enjoy it!

Roel Funcken and I recently collaborated on this remix for electronic duo Lamb. They're currently running a remix competition for 'Heaven', with first prize being inclusion on the vinyl re-issue of their 2001 album What Sound.

Kick with Chrome: A Chrome Experiment

Here's a fun little project for which I handled the audio. It's a set of three World Cup-themed mini games, comprising Infinite Dribble, Space Kick, and Shootout. You use your phone/tablet as a controller, linked with a Chrome browser session to play (though you can use the phone/tablet as the sole screen, too). You can read a little more about the technical showcase on the Chrome Blog. 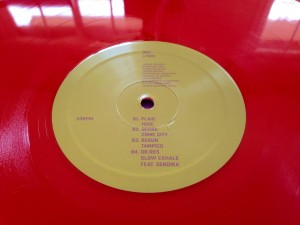 A new track of mine, Zome City, was released yesterday on Barcelona's Lapsus Records, featuring on their DEU compilation, available on red vinyl and download. The compilation contains 17 tracks, from artists such as Plaid (vinyl-exclusive, sadly), Kelpe, Vector Lovers, and many more.

I've been playing a tweaked version of Zome City in my latest live set (skip to 08:50 in the Utrecht recording posted a week or so ago if you're curious to compare the two), and find having a track on vinyl to be a satisfying closure to the production process---something I've really missed with the download releases, as it's been a while since my last vinyl release. Looking forward to seeing some more new music on vinyl this year!

Here's a new remix I produced for Min-Y-Llan, out now for download on Touched. As with their previous compilation release, the entire proceeds from this album go to Macmillan Cancer Support. £3 for 38 tracks, including remixes from Plaid, Christ., Roel Funcken, Tim Koch, Keef Baker, and many more.

Here's a recording of last Sunday's live set, performed at the seventh Mindcamp event at the Tivoli Spiegelbar in Utrecht, Netherlands.