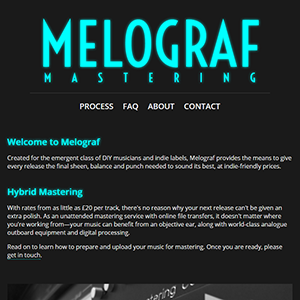 I've just redesigned the site for my mastering service, Melograf Mastering, to make it much more accessible on mobile devices. It's a lightweight html5 site, replacing the previous WordPress and Flash-based incarnation that had nonetheless served me well for the past six years (crazy to think it's six years old already!). I've retained the dark, cyan-heavy style though---if it works, why change it?

Hopefully everything renders just fine, with nippy page loads and responsive resizing for different browsing devices, but if you notice anything afoot, embarrassing typos and the like, please give me a shout. It feels odd to do without WordPress, but it admittedly made less sense on a blog-less site, and was used primarily for the feedback comments and the contact form. Now that it's been established for a while and I have more credits under my belt, the loss of a feedback page is hopefully minimal. It's been almost fun refreshing my basic web dev knowledge, reading up on html5, css3, media queries and the like. For a dilettante like me, these more recent developments certainly seem to have made designing a simple site much more straightforward and browser-compatible. Lo, progress!

Here's a new track I've been working on while trying to get to grips with Ableton Live as a production tool, rather than performance tool. Being so used to Cubase, it's been quite a workflow departure for me (though largely a positive one, I'm happy to say). What Live lacks in comprehensive MIDI and automation editing, it gains in immediacy and ease of audio editing (which has always been a weakness for Cubase, betraying its roots as a MIDI sequencer). Plus some Max for Live tweaks help patch the holes in core functionality, and also help make setting up some MIDI control panels for my hardware synths a breeze (especially handy, as much of my hardware requires loads of menu diving, and is pretty laborious to program).

I’ve just spent the day fiddling with my site’s layout, reducing the site width, along with its copious amount of white space, which involved a fair amount of theme tweakery. It’s highly likely that I’ll have broken something somewhere, so if anything looks odd please let me know!

Each print is just under twelve inches square in size (fitting nicely in a vinyl sleeve), has been digitally printed on thick 300gsm matte stock, and comes with an instant Bandcamp download in the format of your choice.

For those who don't want vinyl, it's still a great way to enjoy an element of physicality with your music, not to mention they'll also look stunning framed on the wall.

All the physical items I have for sale can be seen my Bandcamp merch page.

A few weeks ago I completed scoring this charming animated short called 'Dresslocked'. It was the final year project for talented Teesside animation student Domareen Fox, and allowed me to break in a few new sound libraries, as well as record plenty of sound effects and foley work. I'm always up for more of this kind of work, so please get in touch if you'd like me to score your film/game project.

Isolette vinyl is currently available from the following stores:

Plus my Bandcamp store.

Clone, being the storefront to their own distribution arm, will have the most stock, and so is a good fall-back option should a closer store sell out.

Here are a few sleeve photos to give you an idea of how the spot gloss effect contrasts beautifully with the matte stock:

'Isolette' is released today in its digital form, available from all the usual download stores and streaming platforms. Features a 'Glassmaker' remix by Roel Funcken.

A small run of vinyl will also be available at the start of next week, released through Shipwrec. I'll be sure to update with more info as soon as it's available.

I've collated a few store links below, in case you wish to preorder and secure yourself a copy of the EP on vinyl, ahead of its release on the 20th.

I'll add to the list as more stores update their inventory.

I'm excited to announce that I'll soon be releasing a new EP, called Isolette, through the Netherlands-based Shipwrec imprint. Due on the 13th of January 2015, it will arrive on 12" vinyl plus download (UPDATE: the vinyl will be a week late, arriving on the 20th instead), featuring six tracks (including a remix by Roel Funcken), plus a bonus download track. All vinyl purchases will come with a download code.

The artwork was expertly designed by nkurence, and features some extra special ink finishes for the vinyl sleeve. It's been a while since I've had my music pressed on vinyl, so I can't wait to get my hands on these.

Listen to clips from Isolette here:

255 generous artists have contributed to what amounts to almost a day's worth of music, in aid of the Macmillan Cancer Support charity, all for the meagre sum of £12+. Buy here. I've contributed a new track: 'Rowing to the Riverhead'.