Petl 12” EP out Monday on Baselogic 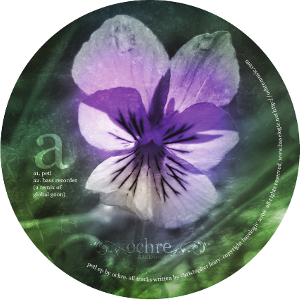 New Ochre vinyl! It's been quite some time since I've had something out on vinyl, so I'm excited to announce the release of a new 12" EP, released on Baselogic, on Monday (distributed by Veto). Here's the tracklist:

Three of the four tracks have been available here on my site in the past, but I hope that won't dissuade you from grabbing a copy; it's been mastered at Alchemy to sound its best for its vinyl debut, so it ought to be no contest between mp3 and 12".

It's available to buy at the moment from Boomkat and Juno, to ship on Monday. No doubt it will filter through the retail channel over the course of the week, but if your favourite store doesn't hold it, please ask them to order it in for you.

Like all other Baselogic releases, it will also be available digitally in due course. My remix of Ed Chamberlain is now available on mp3 from Juno, Amazon, Beatport and Nuloop, with usual suspects Bleep and iTunes to follow.

Okay, with all that renovation kerfuffle out of the way, I'm happy to get the mastering underway once again; I'll be chasing up those of you who've been in touch during the downtime, and have organised a schedule to catch up with this.

Meanwhile, I'm currently working on a remix for The Collectors (featuring Benet Walsh, co-writer of a few tunes of mine that made their way onto the Death of an Aura EP, with more to follow). It'll be a digital-only release at some point in the first quarter of 2009, I think.

Also, watch this space for a new vinyl EP release, being manufactured as we speak. It's been too long since I've had something out on vinyl, so I'm pretty giddy about getting my mits on it. I don't even have a turntable at the moment... okay so I just want to lick the vinyl---what's wrong with that?

Well, it was a fun experiment for the past six months, setting up a download store for my unreleased music. But following the removal of a few tunes for an upcoming release, I've decided I'd rather have more people listen to my music than have a little extra pocket money, so I've reverted to giving everything away for free (still in 320kbps mp3 and FLAC formats).

For those curious about the kind of money I was making with the store, here are some stats: Since launch, 56 generous souls purchased music from the store, with 120 items sold in total, earning me about £299 (minus the monthly E-Junkie service plan fee and PayPal charges). Not a bad run for a musical nobody such as myself.

Hopefully the disclosure of my sales information doesn't come off sounding either like a complaint or a boast---just keeping you all in the loop. Thanks very much to everyone who stumped-up for the downloads; the warm fuzzy feeling you must have felt supporting independent music will have hopefully made up for the slight annoyance of seeing it all freely available again.

In an altogether non-unrelated subject, this little read and the subsequent discussion may provide some entertainment. As a die-hard cynic I couldn't help but revel in its unrelenting, though thoroughly entertaining, pessimism. Certainly brought up a few smiles reading it, that's for sure.

Well, I'll limp on, musically, trying my damnedest to get this album finished before 2010...

Fictional Soundtrack Material for Download in mp3 and FLAC

Regular visitors to the site may have noticed a few changes to the music page, with the notable addition of 'Fictional Soundtrack,' eight tracks freely available for download in mp3 and FLAC formats.

These were demo pieces written in 2005 for a fairly well-known Half Life 2 mod called Minerva. It's a very well crafted mod, with a definite style of its own, and a cool, mysterious (i.e. rather cryptic) plot. I originally contacted the author, Adam Foster, and offered these tunes for subsequent episodes, but alas Adam had his music-needs already met. Ah well.

If you have HL2 on your PC, then go and grab Minerva---it's a very worthy free download, and a very challenging extension to the HL2 world. And would you believe it, on the back of the attention garnered by Minerva among the mod community, Adam now works for Valve, developing HL2: Episode 3. Very well-deserved in my opinion---congrats, Adam! That has to be the ultimate fairy tale ending to every mod developer's dream. Hopefully Adam will still have time to add further episodes to Minerva.

Anyway, back to the music---this is freely available under a Creative Commons licence, for you to use in your own not-for-profit games, mods, videos etc. If you want anything reworked or tweaked for a particular project, let me know. :)

Death of an Aura EP out now

I'm pleased to finally be able to say that my new download EP, Death of an Aura, is now available for preview/purchase on Bleep. FLAC versions should be following shortly; I'll be updating this post, as well as the discog page, with links to additional stores as and when store support improves.

Musically, I suppose you could say the EP features my vocal debut, albeit mainly through humming and oohing/ahhing here and there for a bit of extra texture, with additional non-lyrics for good measure. Still, I did find the process a lot of fun, adding an immediacy that's normally lacking from my usual methodical composing. Lots of home sampling too, which is certainly something I only really touched upon with Lemodie, and completely ignored with AMND.

A couple of tracks ('Napoli' and 'Raido') are the result of a collaboration between Benet Walsh and I (you may recognise Benet from his work with Plaid, as well as his own work as one half of The Collectors), which were fantastic to work on. Hopefully we'll get a few more tracks done together by the time the album arrives---thanks for the help, Ben!

Anyway, I hope you enjoy it. :) Let me know what you think, and please---if you can spread the word across any forums or communities you participate in, I'd very much appreciate it. 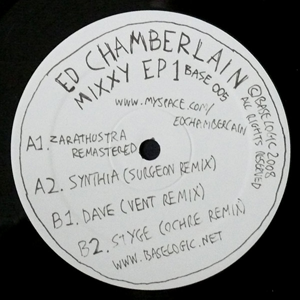 Ed Chamberlain's Mixxy EP1 has now been released on Baselogic Records, featuring my remix of 'Styge' (still up for streaming on MySpace). The EP is available to buy on 12" from Warpmart and Juno, with more stores to follow. If you can't find it at your local store, please ask them to order it in.

Death of an Aura EP

Six tracks, released on the ninth of June, on Benbecula Records. All Minerals subscribers will receive this limited Digipak CD EP; non-subscribers will be able to purchase the EP from their preferred download store in mp3 and FLAC formats.

A couple of you were asking about the surround version of Reception (see here for more info), so here it is:

Working in surround is still somewhat of a novelty for me, and I'm sure I've yet to get to grips fully with it, so let me know if you hear anything that sounds like it shouldn't be there and I'll make appropriate adjustments.

You might have noticed a few changes to the site of late, as I've just updated Wordpress to the new 2.5 version, which includes a whole host of updates on the admin side of things to make my life a little easier. Cosmetically though, there are few changes, although you'll have noticed the addition of Gravatars to the comments section.

For the uninitiated, Gravatars are 'Globally Recognised Avatars', and exist to make it easier for us to have a uniform identity across the net (the avatar equivalent of OpenID, if you will). It will become quickly apparent, by the dearth of avatars in my comments section, that this is very much A New Thing, and has yet to catch on within the online world (although I have noticed one or two commenters have caught on already).

So, if you fancy procuring a Gravatar, all you need is an email address to sign up and associate an avatar with and you're all set (you can assign multiple emails with different avatars).

Continuing the theme of updates, I've tweaked and tinkered with the download store, mainly to a) reduce the number of tracks I have to tend to, and b) by popular request, arrange the downloads into more manageable album-sized chunks, with the option of buying individual albums separately.

The previously 'orphaned' tracks are now separated into three volumes, imaginatively titled I, II and III (yes, I did take a pinch of inspiration from the recent NIN release), and are now approximately grouped chronologically (by completion date, rather than upload date). Each album is about 45 mins long, and will cost you just £2 (~$4---yep, I've switched currencies, allowing me to accept Google Checkout now too!).

Finally, I've also provided each release in 320kbps and FLAC formats, as a single purchase, to save you having to pick which format when buying. You'll get links to separate zips of each format emailed to you---just choose which you'd like to download.