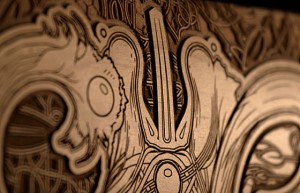 This will be old news to those following me on twitter, but it's so cool that I'm compelled to write a little blog post about it too.

Designer Nate Reeves has knocked up a very cool intricate and flowing Ochre logo, which he then sent to a bespoke engraving outfit to produce a very tasty 3D laser-engraved skateboard deck, with the detailed Ochre logo embossed across it. How cool is that? Talk about a unique artefact. Along with the Ochre logo, he sent a couple of other designs along with it for the same treatment, such as his artwork for Narita's final Terminal compilation, and a third design of his own.

Check out more superb pics of the decks in all their glory here.